Assessing the legality of the power changes in Ukraine 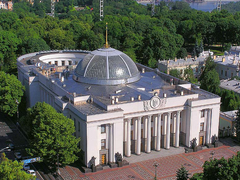 The decision referred to the facts that Yanukovich had abandoned his office and was responsible for the deaths of more than 80 protesters and police during the protests in the preceding weeks.

According to Article 108 of the Constitution of Ukraine as valid on 22 February 2014:

"The authority of the President of Ukraine shall be subject to an early termination in cases of:

As President Yanukovich did not formally resign, the only option available for his removal was the procedure of impeachment. This is regulated in Article 111 of the Constitution:

„The President of Ukraine may be removed from the office by the Verkhovna Rada of Ukraine in compliance with a procedure of impeachment if he commits treason or other crime.

The issue of the removal of the President of Ukraine from the office in compliance with a procedure of impeachment shall be initiated by the majority of the constitutional membership of the Verkhovna Rada of Ukraine.

The Verkhovna Rada of Ukraine shall establish a special ad hoc investigating commission, composed of special prosecutor and special investigators to conduct an investigation.

The conclusions and proposals of the ad hoc investigating commission shall be considered at the meeting of the Verkhovna Rada of Ukraine.

On the ground of evidence, the Verkhovna Rada of Ukraine shall, by at least two-thirds of its constitutional membership, adopt a decision to bring charges against the President of Ukraine.

The decision on the removal of the President of Ukraine from the office in compliance with the procedure of impeachment shall be adopted by the Verkhovna Rada of Ukraine by at least three-quarters of its constitutional membership upon a review of the case by the Constitutional Court of Ukraine, and receipt of its opinion on the observance of the constitutional procedure of investigation and consideration of the case of impeachment, and upon a receipt of the opinion of the Supreme Court of Ukraine to the effect that the acts, of which the President of Ukraine is accused, contain elements of treason or other crime.“

It is obvious that the Ukrainian parliament did not follow the procedures as outlined in the constitution. With its vote on 22 February 2014 parliament could just have initiated the impeachment process based on charges related to the deaths during the protests.

The constitution then requires an investigation by an ad hoc commission, which should have produced proper evidence of the direct criminal responsibility of President Yanukovich, and it also requires a review by the Constitutional Court and the Supreme Court. These did not take place.

The argument made by those supporting the removal of President Yanukovich was based on the claim that Yanukovich had used his time in office to manipulate the judicial system and that the bodies supposed to participate in the impeachment procedure, namely the state prosecution, the Constitutional Court and the Supreme Court, had been packed with his appointees through dubious means and that they had made decisions not in line with the constitution. As a result, it was argued, these bodies had lost their legitimacy. The parliament re-confirmed this position later when it voted to sack the third of judges of the Constitutional Court appointed by parliament.

In order to justify the insufficient number of votes supporting the removal during the parliamentary ballot, a similar argument would need to be made about parliament itself, claiming that manipulations of parliamentary elections and faction membership make the parliament illegitimate. In part this position seems to be supported by public opinion, with two thirds of the population supporting early parliamentary elections in parallel to the early presidential elections. However, at this point it becomes clear that the argument leads into a dead end. If all state organs have lost legitimacy due to political manipulations, there is no legitimate way to formally remove the president.

The reason for this rule is obvious. If foreign countries would start to judge the legality of power changes in other countries, they would, first, rival the constitutional courts of the respective countries and would need to claim higher legal competence, and, second and more practically relevant, many countries would no longer be linked through diplomatic ties.

Heiko Pleines, Research Centre for East European Studies at the University of Bremen