The number of persons reaching Europe to apply for political asylum has increased in recent years to peaks close to the records registered in 1992. The humanitarian implications are now even more severe, with thousands of migrants dying in the attempt to cross the Mediterranean Sea.

Following the tragedy of April 19th, 2015, when more than 800 persons died in a single shipwreck, the European Council held a special meeting. At the meeting, a 10-point plan was presented that included a commitment to “consider options for an emergency relocation system”. In the resolution that followed shortly on April 28th, the European Parliament reiterated the need for “solidarity and fair sharing of responsibility”. On May 13th, the European Commission published an “EU Agenda for Migration” including a set of detailed short- and long-term priorities. Among short-term priorities, the Commission planned to trigger by the end of May the emergency response mechanism provided in the EU Treaties under Article 78(3).

While sharing responsibility for migration by relocating asylum seekers among Member States has been a political taboo for decades, in the turn of a few days the principle found endorsement by the three main EU institutions. The Agenda for Migration, in particular, went far beyond declarations of principle. It included a “relocation key” based on “objective, quantifiable and verifiable criteria that reflect the capacity of the Member States to absorb and integrate refugees”. The relocation key is based on four elements – population size, GDP, average asylum applications in the period 2010-2014, and unemployment rate – with an impact of respectively 40, 40, 10, and 10 per cent on the overall formula.

In the weeks that followed, the Commission clarified that the emergency mechanism would initially be used for the redistribution of 40,000 asylum seekers from Greece and Italy, two countries that recently experienced an exceptional rise in asylum applications, to all other EU members (with the exclusion of Denmark, Ireland, and the UK that can ‘opt out’ from EU migration policy). To date, Member States have not reached an agreement on how to implement the mechanism. However, the proposal is still on the table – and it provides the basis for some useful reflections.

Asylum seekers are unevenly distributed among European countries: few countries receive a large share of all applications. This, however, does not mean that the distribution is ‘unfair’. It may be, in principle, that the destination of asylum seekers reflects the capacity of single countries to host refugees – for example, because they are larger or wealthier.

In order to assess the fairness of the distribution, we need some measure of the ‘protective capacity’ of Member States. In some way, this is what the European Commission produced with its relocation key, which is shown in the second column of the table below. Even though the key is meant to be used for emergency measures, we can take it as a rough assessment of the relative protective capacity of EU Member States. The Commission is indirectly suggesting that, based on its population, GDP, hosted refugees, and unemployment rate, Greece would be able to provide protection to 1.90% of those who seek asylum in the EU, Finland to 1.72%, Luxembourg to 0.85%, and so forth.

If we take this admittedly rough – yet "objective, quantifiable and verifiable" – measure of protective capacity, the obvious question is then how the actual distribution of asylum seekers relates to the theoretical ‘fair’ distribution provided by the European Commission with its relocation key. In other words, once we know the ‘protective capacity’ of each EU MS, we can easily observe the difference between that capacity and the actual share.

We have done some simple maths, and we suspect that the results may come as a surprise to some observers. Alongside of the relocation key, the table below shows the asylum applications received by each country in 2014 (absolute numbers and percentages), and the gap between those numbers and the theoretical distribution that would result if each country contributed with a proportion fair by the relocation key criteria.

We are now in a position to assess the ‘fairness’ of the distribution. The second and third columns of the table show that, in the period observed, the distribution of responsibility was unfair indeed. Germany and Sweden alone were the destination of almost 50 per cent of all asylum applications. If we add France, Italy and Hungary, we see that five countries took almost 80 per cent of the total, with twenty countries receiving the remaining 21 per cent.

The remaining columns show the gap, in absolute and relative terms, between the actual distribution and the relocation key. In 2014, fifteen of the observed countries took up a share of asylum seekers that was just two percent points higher or lower than their ‘protective capacity’. These countries included, for example, Bulgaria, Cyprus, Luxembourg, the Netherlands and Slovenia. In turn, some countries show impressive gaps, which are reproduced perhaps more clearly in the below figure. 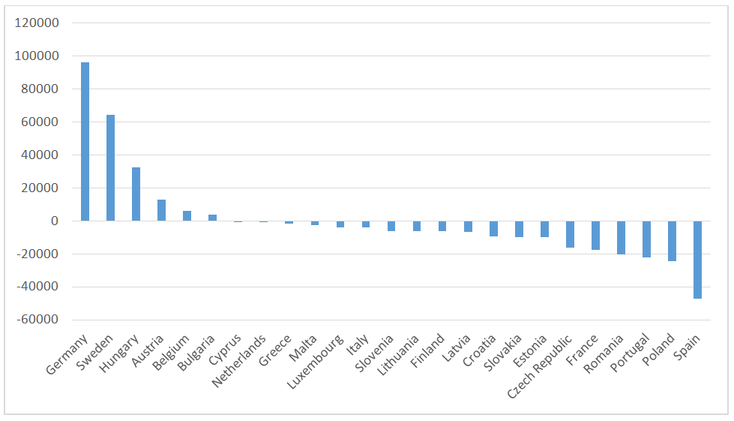 Among the countries that received a significantly higher share of responsibility than would be fair according to the Commission’s key, Germany and Sweden stand out. Germany took almost 100,000 more asylum seekers than its fair share, while Sweden took almost 65,000 more. Hungary also shows a high positive gap of about 32,500 applicants.

On the other end of the distribution, we see the countries that, in 2014, received less than their fair share. Among them, Spain is notable with a negative gap of approximately 47,000. Poland, Portugal, and Romania follow with negative gaps of between 25,000-20,000, and France with about 18,000 asylum seekers less than its fair share.

This simple exercise bears some perhaps unexpected results, which do not necessarily conform to the way some countries tend to portray themselves. First, those countries that do take a disproportional share of responsibility are not generally vocal about any ‘invasion’. This is clearly the case of Germany and Sweden, which take a much higher responsibility than often perceived by public opinions. Hungary follows with the third largest gap – and a rather distinctive reaction.

Second, the data do not always support the claims made by those countries that often portray themselves as the destination of a mass invasion. This is the case of Spain (with an impressive negative gap), and even of Italy, Greece and Malta.

Of course, this does not mean that these countries are not facing a significant pressure. First, the modality of arrivals, rather than mere numbers, impacts the perception of the intensity of the phenomenon. Second, some countries (as Italy) are known for failing to register large numbers of those who arrive irregularly, which means that those arrivals are not taken into account here. Third, states that long were countries of emigration have not yet developed the capacity to manage large inflows, as clearly comes out from the images of hundreds of migrants sleeping in train stations. Fourth, while overall numbers may be manageable, inflows are often concentrated in few localities: while Italy may not be distressed, Lampedusa clearly is.

Another more general caveat is that these proportions are sensitive to remarkable change in time and space, and that the variables (and respective weights) chosen by the European Commission to develop the relocation key may carry some arbitrariness. This is surely the case, but not necessarily to a degree that invalidates the whole exercise. In some ongoing research, we test many other combinations of variables (and related weights), and simulate their impact on the calculation of protective capacities and gaps. While the outcome of different approaches is significantly different, there are some striking regularities. Irrespective of how you develop measures of protective capacity, countries like Germany and Sweden always take much more responsibility than their fair share, while countries like Spain and, to many calculations, Italy, generally take less.

We believe that it is worth carrying out similar exercises and that, despite their clear limitations, more evidence-based discussions should inform public debates and political decisions on such sensitive issues.