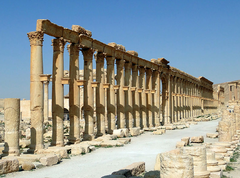 On June 13th 2016, Director-General of UNESO Irina Bokova gave a speech at the 14th edition of the Europe Lecture. Together with the president of the International Criminal Court Silvia Fernández de Gurmendi and researcher Sada Mire, she expressed her view on the many threats to cultural heritage in times of conflict. The lecture was moderated by Sneška Quaedvlieg-Mihailović.

What are the strategies and actions to respond to cultural cleansing, deliberate destruction of culture and illicit trafficking of cultural property, which is linked to the financing of terrorism? What are the European Union and the international community doing to safeguard the world's cultural heritage? Not only culturally, but also from a political and security point of view? What lessons can be learned by European politicians and citizens?

Ms. Irina Bokova (Bulgaria, 1952) has been the Director-General of UNESCO since 15 November 2009 and was re-elected for a second term in 2013. Ms. Bokova has successfully pushed forward an agenda for further preservation of humanity's cultural heritage.

Dr. Sada Mire (1977) is a lecturer at Leiden University. She specialises in archaeological and anthropological theory and practice and cultural heritage studies, with a focus on pre-Christian and pre-Islamic cultures in the Horn of Africa.

Ms. Sneška Quaedvlieg-Mihailović is the Secretary-General of Europa Nostra, the pan-European federation of non-governmental organisations active in the field of cultural and natural heritage.

The Europe Lecture was organised by the Europe Lecture Foundation, in cooperation with Europa Nostra, a pan-European federation of NGO's active in the field of cultural and natural heritage which is based in The Hague. With many thanks to the Netherlands National Commission for UNESCO.