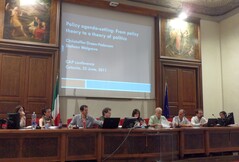 , Lucie Spanihelova, MI research director Arco Timmermans and MI fellows Anne Rasmussen and Gerard Breeman participated in the 4th Annual Conference of the Comparative Policy Agendas Project in Catania, Italy from 23rd to 25th June. Together with some 50 colleagues from 10 countries they presented and discussed on-going work and future developments in the research program on the politics of attention in Europe and North America. The Montesquieu Institute was represented with contributions on the Netherlands in comparative perspective and the European Union (EU).

A poster presented by Lucie Spanihelova and Arco Timmermans explored the attention to Europe in different policy venues in the Netherlands and related this to the attention to Europe by Dutch political parties and citizens. The study showed large variation in the extent citizens and parties influence attention to EU issues on three types of political agendas. Coalition agreements made in government formation tend to address more EU related topics when citizens have more attention to the EU. However, public disposition about the EU does not relate in any way to the extent of EU attention in annual Queen’s speeches and in bills submitted in parliament. This may indicate that political parties in government are risk averse on EU related matters. The EU is most prominent in attention in the least publicly exposed policy agenda: the production of legislation. On this agenda, political party preferences on the EU are much less relevant than the mandated attention stemming from commitments to transposition of European regulation.

Other posters at the conference were on electoral promises and what happens with them, competition and cooperation between parties, rhetorics in parliamentary behaviour, the ways in which parliamentary committees search information, the evolution of law-making, and the political consequences of media attention.

A paper by MI Fellow Anne Rasmussen and Brendan Carroll from Leiden University analysed the participation of various actors in the European Commission's online consultations across a number of policy fields in the period 2000–2010. Business interests appear to be most active in this consultation instrument, but they vary in prominence between policy areas. Most importantly, in areas of distributive and redistributive policy (structural funds, cohesion policy, agriculture, etc.) there is more diversity in the types of interest groups active in consultation than in domains of regulatory policy. This latter type of policy seems to attract mostly specialized interest organizations of less diverse type. This finding signals a difference in democratic representation in the European Union across domains of policy.

A paper by Petya Alexandrova, Arco Timmermans and Marcello Carammia from the University of Catania presented the dynamics of agenda-setting in the European Council from 1975 to 2010. This study showed that the European Council increasingly is exposed to different pressures: maintaining a balance in attention with an expanding number of member states, and being responsive to often unexpected major international events on which the European Heads of State or Government must show their shared concern. The pattern of attention suggests that as the most central ‘high politics’ institution, the European Council moves between these type of pressures in cycles, from a more diverse to a more concentrated policy agenda and back again to agenda diversity in order to meet the many expectations. The European Council has used its institutional flexibility to determine the size of the agenda and the frequency of its meetings in order to avoid that these cycles of attention get out of control.

Other panels at this conference were on populist parties and how traditional parties react to them, on changes in priorities in governmental spending, effects of public opinion on governments and vice versa, and the ways in which attention to specific themes such as the environment, economic crisis, large urban problems, foreign policy, terrorism and organized crime either push or pull other problems on the agenda of parliaments and governments.

Other research sessions were on developments and experiences with computer supported content coding and international coordination of large scale data collection. The databases of the Comparative Agendas Project now comprise over 2,000,000 coded indicators of political attention over long time periods, using one similar coding scheme across 12 countries.

Arco Timmermans organized a concluding round table ‘Comparative Agendas Project: State of the Art’, where lessons of existing work, challenges in large scale comparative analysis and future developments in theory, methods and contents of empirical research were discussed. The Comparative Agendas Project also launched a new international book series with publisher Palgrave Macmillan: ‘Comparative Studies of Political Agendas’. In this book series comparative agendas research will be linked to other scholarly work on representative government in Europe and North America.